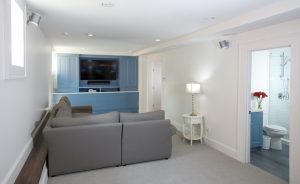 Atlanta Real Estate Forum congratulates Copper Sky Renovations for winning a Gold OBIE in the Basement Remodel over $75,000 category for an Atlanta basement remodel. Presented by the Atlanta Sales and Marketing Council, the OBIE Awards are the premier awards given in the Atlanta new home construction industry.

This basement was originally a dug out crawlspace in a 1920s-style Tudor house. The crawl space had a thin slab floor and was used mainly for mechanicals and rough storage. This was a significant undertaking as the team had to demo out the existing slab in order to excavate deeper to allow for higher head height. Copper Sky also had to demo all supporting posts while the main floor was temporarily supported. The existing block walls had no footer, so the had to dig out underneath the block walls and pour a continuous footer in 4-foot segments. The team at Copper Sky Renovations also had to install steel beams in order to provide adequate support and maintain a low profile hidden beam. The other major challenge was hiding all of the existing and new mechanicals in the ceiling/soffit throughout the basement. The demo, foundation, and framing were the major challenges for this job and where most of the work lied.

Once a solid shell was built for the basement, Copper Sky finished it out with the same finishes as the the rest of the house so that it appeared the basement was original to the house. They added a 3-piece bathroom for convenience and a full bar so that the client could easily entertain guest. Functionally, the client was given tons of storage by adding multiple closets. Perhaps the biggest value add for the basement was the addition of the TV area and play area for the kids. The clients have three small children and the basement provides them with an optimal play area for the kids. The large sectional couch and big screen TV allows the entire family to spend time together watching movies or playing video games.

New American Funding Strives to Provide Homeownership to All