Bringing Broadway Back to Atlanta with Russ Belin

Russ Belin, vice president of the Southeast region for Broadway Across America, joins the Atlanta Real Estate Forum podcast to discuss the pandemic’s effects on the theater industry and this year’s exciting season at the Fabulous Fox Theatre. Belin joins hosts Carol Morgan and Todd Schnick for the Around Atlanta segment.

Acting as a middleman, Belin and his team handle subscriptions, marketing and present shows featured at the Fox Theatre. Broadway Across America works with producers to build out incredible displays for patrons to enjoy, typically bringing 10 to 12 shows per season. According to Belin, the past 18 months were tough for performers and patrons alike as the theater industry largely depends on the revenue from live shows.

“It’s been 550 days since we presented our last show,” Belin said. “Our job is to bring people together to make memories. It’s been weird to not have that feeling.”

The theater industry and Broadway Across America underwent many changes attempting to build seasons and reroute shows as pandemic conditions worsened. The main focus was to reschedule shows and plan and manage ticket subscriptions to ensure an easy return once it was safe to do so. According to Belin, it was amazing to see the support and excitement from season ticket holders during such a difficult time and how thankful his team was for the continued support. 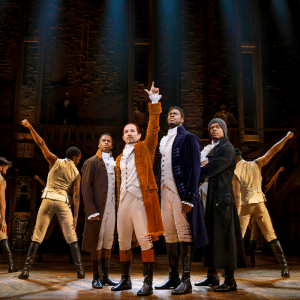 In residence until September 26, 2021, Hamilton is the first show to return to the Fox Theatre since its March 2020 closing. Belin expressed gratitude that a big show like Hamilton is the season debut after a turbulent previous year. Operating safely, about 4,500 patrons per show enjoy the magic of Broadway in person once again.

Written by Tony-award winner Lin-Manuel Miranda, Hamilton is the story of Alexander Hamilton, a young immigrant from the Caribbean, and his journey to the United States. Working in tandem with acclaimed historical figures, such as Thomas Jefferson and George Washington, Hamilton built the U.S. treasury, as well as other developments, to make our newly formed country successful. Told uniquely and powerfully, Hamilton implements hip-hop, dance and expressive music to tell the story based on the biography by author Rob Chernow.

Although Disney+ released the professional recording of the original cast of Hamilton during the height of the pandemic, it motivates many viewers to see the show live. Releasing shows on digital platforms allows for larger audiences to access the brilliance of Broadway. However, nothing compares to seeing a show in person! Although the current cast of Hamilton is not the original, it is a talented group of professionals, including a few Atlanta natives, that are passionate about delivering this show to audiences.

This season marks 40 years of Broadway in Atlanta and will feature highlights such as Fiddler on the Roof, Disney’s Frozen, Ain’t Too Proud, Mean Girls and more!

“I’m excited that we’re going to help the Fox doors reopen and get our audiences back there,” Belin said. 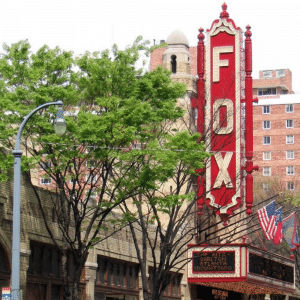 Fiddler on the Roof is a great show to bring family and first-time theatergoers, winning multiple Tony Awards on its original run and the revival. Ain’t Too Pride celebrates the career of The Temptations on their journey from Motown to the Rock and Roll Hall of Fame with well-known hits and a night filled with nostalgic fun.

Disney’s Frozen is a much-anticipated debut at the Fox Theatre and a great opportunity for families to experience the magic of Disney up close. Based on the pop culture hit by Tina Fey, Mean Girls will continue the stream of hit shows coming to the Atlanta area with comedy and catchy songs in this pop culture sensation.

Despite current setbacks, the 2022-2023 season is already in the works and Belin hinted at a strong lineup! The tentative release for the new season is March 2022.

“Atlanta is one of the best markets,” Belin said. “We’re going to be at the forefront of the producers’ minds on bringing the best hits from New York straight here. We thank the Atlanta audience for being so supportive and putting us in that position.”

To secure tickets and explore shows coming to Atlanta, visit www.broadwayinatlanta.com. Interact on Facebook, Instagram and Twitter for regular updates and information on shows. Listen to the full interview above!