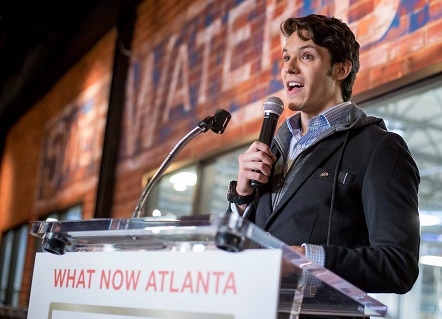 Founded in 2010, What Now Media Group has grown to be recognized as the leading news source for retail, restaurant and multifamily openings and closings in the Atlanta area with over 1.5 million readers. Founder Caleb J. Spivak joins Co-Hosts Carol Morgan and Todd Schnick on this week’s Around Atlanta segment of Atlanta Real Estate Forum Radio to discuss the group’s second market in Los Angeles as well as share updates on What Now Atlanta.

Spivak kicks off the show by announcing that in addition to What Now Atlanta, What Now Media Group has officially launched What Now Los Angeles. The goal of both What Now online publications is to “get the scoop” and yet-to-break news in relation to local real estate, retail and dining news in the Atlanta and now Los Angeles areas.

“As time has gone on, we have really found that our niche is in some of the smaller brick and mortar businesses that a lot of the larger publications don’t report on,” Spivak said. “We’ve really focused on, as an organization, being a resource to new and growing businesses in the markets that we serve, and seeing how we can help them as a mouthpiece to open and grow to the next level”

When it comes to getting to that breaking news first, Spivak explains that the What Now team is dedicated to pounding the pavement and sifting through various permit applications, liquor licenses and neighborhood planning unit meetings, demanding information from the folks involved in planning these brick and mortar businesses and doing it in a cooperative but relentless way.

There are openings and closings on a daily basis in the Atlanta area, which is really the focus of What Now Atlanta (Fulton, Gwinnett and DeKalb and some of the surrounding counties). According to Spivak, what they have noticed is that restaurants are not staying open as long as they used to, but that’s not necessarily an issue.

“These restaurateurs are opening to great fanfare, and there’s kind of this opening push where they’re the hottest restaurant and everyone flocks to them, and then they get their regulars that hang out and come back week after week of month after month or day after day depending on how loyal they are,” Spivak said. “But then something new opens and that same ‘we’ve got to check out what’s next’ mentality is applied and there’s a drop in traffic.

“What we see a lot of restaurateurs in Atlanta doing is constantly reinventing themselves and even within their existing restaurant spaces, closing down [previous] concepts and opening something new, or signing leases that are not as long term as what we’ve seen in the past, so that they can be a little bit more flexible,” Spivak said.

Additionally, What Now Media Group also covers breaking retail news throughout the Atlanta area. North Fulton has seen a lot of success with its innovative mixed-use retail spaces including Avalon (which celebrated its 5th anniversary in October 2019) and newly opened Halcyon and  Alpharetta City Center.

“[Real estate developers] are quickly realizing with the increase in online shopping, the only way to get folks to our centers, to drive business for our retailers, which is how we profit through rent, is to create an experience, and so that’s what’s happening at centers like Halcyon, Alpharetta City Center [and] Avalon,” Spivak said. “Intown [examples include] Ponce City Market and Colony Square, which is under a ‘re-imagination’ as North American Properties puts it, and what’s happening over at Westside Provisions District.”

Listen to the full interview above to learn more about multifamily developments near Ponce City Market and Old Fourth Ward. To learn more about What Now Media Group and subscribe to the email list for Atlanta news, visit www.WhatNowAtlanta.com.

New American Funding Strives to Provide Homeownership to All