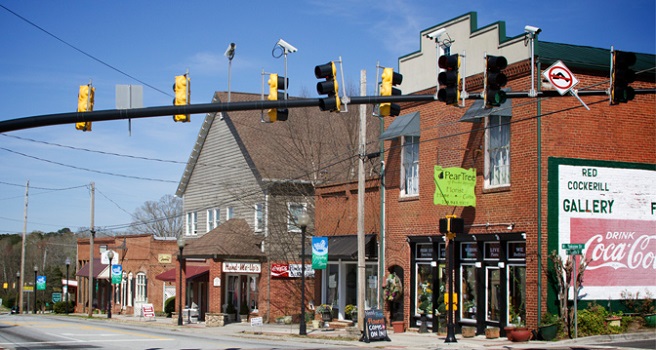 In 2019, the City of Powder Springs and its Downtown Development Authority (DDA) launched phase two of a capital project to replace the old town square with a new central park, complete with a lighted outdoor pedestrian mall, live performance stage, parking, and unique features including ping pong tables, a children’s play area, shade landscaping and water sculpture. Groundbreaking is scheduled for spring 2019, weather permitting, and the park was expected to be complete by early 2020. Due to Covid-19, the grand-opening of the new park was delayed to May of 2021. The park was completed in 2020, but later than expected.

In addition to the new park project, Powder Springs’ downtown renewal is becoming a success story in its own right. Redevelopment with a nod to the city’s past has extended to new restaurants, retail shops, and residences as developers and entrepreneurs pursue opportunities in the heart of the historic center. Recently, the Powder Springs DDA has agreed to terms with Novare Group to develop on 6.3 acres of downtown property for $3.5 million to build an estimated $38 million mixed-use development.

New Growth in an Old Town

In June 2021 it was announced in the AJC that The Novare Group had purchased land to be redeveloped with a 5,000 square foot commercial property to allow for separate retail and restaurant space and 221 apartments with parking available. City leaders believe the new multifamily apartments will create a greater residential presence in the downtown area. They hope this will fuel current and new businesses in the corridor and nearby areas. Powder Springs mayor, Al Thurman, says, “Real estate experts have been telling us for years: Retail follows rooftops.” He believes the new addition of these homes will bring in more traffic to the downtown area of Powder Springs. As the oldest city in Cobb County, it is time for this much needed update. Being the closest downtown located to the Silver Comet Trail, this new development will be a popular spot.

The Hardy family has a passion for making old things new and a vision to bring renewed life to downtown Powder Springs. Their approach to preserving and repurposing old buildings relevant to the original use of these structures has become a design standard for the city’s downtown redevelopment.

“There’s wind under our wings now as a city,” said Randy Hardy, president and co-owner of MSI, Inc., a large commercial contracting firm in Marietta, Georgia. “I’ve seen a few waves of development and this one is the biggest in 45 years – building on previous work with well thought out plans for growth.”

Randy Hardy was appointed to the Powder Springs DDA by former mayor Patricia Vaughn. He was reappointed as DDA vice chairman by Mayor Al Thurman. In his spare time, Hardy buys, renovates and leases historic properties. His two sons, Sam and Jake Hardy, also part of the MSI organization, are following in their father’s footsteps. Sam, a wood craftsman, builds and sells farmhouse-style furniture nationwide, and Jake, a general contractor, shares his father’s passion for revitalizing historic properties.

Hardy family renovations began 17 years ago with the White Rabbit Cottage, a 1920s bungalow on Due West Road. In downtown Powder Springs, their projects have created leased retail space in a home at 4385 Marietta St., converted a former barbershop to a photography studio, and transformed an old gas station at the corner of Lewis Road and Marietta Street into the Event Station, a private meeting and event facility owned and operated in partnership with Russ Blocksidge, a member of the Powder Springs Business Group.

Randy Hardy’s newest preservation project is the Country Store at 4455 Marietta St. This historical structure once housed retail activity in the main storefront (c.1860), contained cotton and livestock feed in the center section (c.1890), and included a livery stable and blacksmith’s shop in the back portion (c.1850).  Hardy plans to renovate these spaces for retail, storage, and woodworking use — bringing the structure up to code and ADA requirements while creating a living connection to the building’s history.  The back stables will feature large glass windows so that visitors can view furniture making in real time, and the retail area will provide a showroom for finished pieces.

“The exterior will stay the same. It is a city landmark,” explained Randy Hardy. “I’m surprised how many people stop and take pictures of the front of the building and the Coca-Cola® sign painted on the side wall. We are a year away, but I’m very eager to see this property blossom as an important part of Powder Springs’ downtown.”

“The recent study by Georgia Tech confirmed that our city has doubled in size in less than 30 years, growing from about 7,000 residents in 1990 to a population of 14,334 in 2018. Young families choose Powder Springs for its living-centered approach, with safe streets, friendly communities, ample green spaces, increasing amenities, and reputable schools like McEachern High School. Our living-centered vision is equally important to older residents, who maintain close ties with their churches, friends and families,” said Mayor Al Thurman.

In 2018, the city issued 192 building permits for single-family homes, an increase of 8% over 2017, reflecting approximately $36 million in new investment in Powder Springs. In particular, groundbreaking events held at the end of January 2019 highlight the residential dimension of downtown growth. Two new residential developments — The Gates of Powder Springs and Springbrook Estates — are positioned to benefit from close proximity to the Silver Comet trailhead and amenities at the new city park, plus easy access to Richard D. Sailors Parkway, Route 278 and I-20.

Land has been purchased and is being cleared for 56 new townhomes at The Gates of Powder Springs by owner and developer Hollywood Construction, a general construction company formed in 2012. The townhomes to be built and existing Park Place units at 4401 Pineview Drive comprise this new subdivision, located next to the city’s municipal court building and on parcels along Pineview Drive. The subdivision will overlook the new park and downtown dining and entertainment venues.

“Our company began looking at the growth in Powder Springs, the city’s hometown feel, and the appeal of the Silver Comet Trail. These are things homebuyers want,” said developer Neil Fitcher of Hollywood Construction. “When we met with city officials and learned about the opportunity to build at Park Place, close to the new park and other city neighborhoods, we were encouraged to make this investment.”

The Gates of Powder Springs will offer attached three-story townhomes, each with approximately 2,000 sq. ft., four bedrooms, three baths, and double garages. Energy-efficient systems and quality finishes are standard.  The townhomes will be pre-wired for advanced security systems and WiFi door locks. Upgrade options and customization will also be available. The townhomes are expected to be ready by January 2020.

Fischer Homes is developing Springbrook Estates, a new community of 106 single-family homes, located on Lewis Road, conveniently close to new city-center amenities, ball parks, restaurants, and shopping. Family-friendly by design, the subdivision will include a clubhouse, lap pool, tennis courts and playground. Floor plans will range from 2,500 to 3,000 sq. ft., and include three to five bedrooms and flexible spaces for offices, bonus rooms, and living rooms in the Coastal, Craftsman, English, and traditional American designs. Priced from the low $300,000s to low $400,000s, Fischer Homes will release the first home sites in spring 2019, with move-in possible by fall of this year.

“Fischer Homes has had great success developing communities in West Cobb and we see many communities doing well in this area,” said Dave Roberts, market president for Fischer Homes. “We feel Powder Springs is an up-and-coming location, and we’re very excited to see the progress of downtown redevelopment by the city and new incoming businesses. These are factors that moved our project forward,” Roberts said.

With nearly 500 acres of land available for light industrial, commercial and residential development, plus access to major transit routes and nearby air, rail and inter-modal centers, Powder Springs checks off many important boxes for investors and developers. Innovative changes in land inspection, plan review, and permitting processes set in 2017 have continued to save significant project time for developers.

There are limited plots still available for purchase in the Springbrook Estates neighborhood. Visit here for more information.

“I couldn’t be more pleased with our overall growth and especially the remarkable progress of redeveloping our downtown,” said Powder Springs Mayor Al Thurman. “As a city, we’ve stepped up to the plate, and hit that ball out of the park. To our advantage, the game is young, our team is strong, and we have more homeruns to come.”