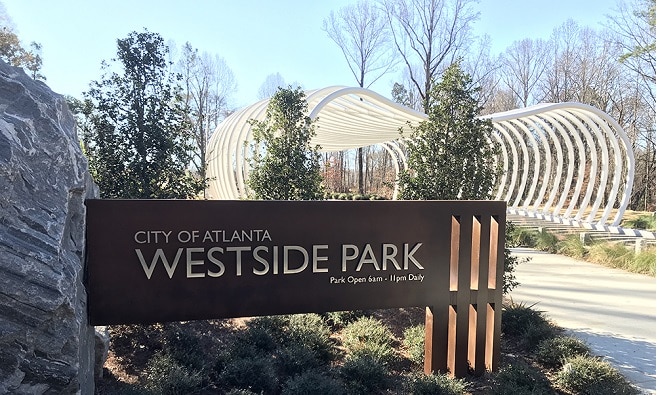 Westside Park also known as Westside Park at Bellwood Quarry and Westside Reservoir Park is the newest park in Atlanta, having opened in August, 2021. Located northwest of downtown Atlanta between highway 78 and interstate 75, this 280 acre park is also the largest greenspace in Atlanta. Bellwood Quarry, now a part of Westside Park, was a former granite quarry until it closed in 2007. It quickly became a scenic hangout spot and was used as backdrop location in shows and movies including The Walking Dead in 2010 and The Fundamentals of Caring in 2016. Phase one of the Park has been completed after four years and 44 million dollars and is now open to the public for general recreation, walking and biking along its five miles of paved trails.

Planning for the park began in 2005 when former Mayor Shirley Franklin announced a plan to acquire the land around Bellwood Quarry for use as both a recreational area and a water reservoir. In 2017 former Mayor Kasim Reed announced Phase One of Westside park. Among the various components of the plan, including an entrance to the park and ADA compliant trails leading to an overlook of the former quarry, the conversion of the quarry to a reservoir would increase the City of Atlanta’s emergency water supply from three to 30 days.

Connecting to the Atlanta BeltLine

The next phase of expansion should see the park’s connection to the Atlanta BeltLine’s Westside Trail northern extension, the Westside BeltLine Connector and Proctor Creek Greenway in the future. The Atlanta BeltLine is an ongoing project to redevelop an existing rail line corridor around Atlanta. The BeltLine will soon also be connected to the Silver Comet trail, creating the longest paved biking trail in the United States at roughly 300 miles upon completion.

Additionally, the surrounding community is in discussion concerning what their next steps should be with regards to further development in the area. In March of 2020, then Mayor Keisha Bottoms placed a development moratorium on the area around Westside park to address concerns of gentrification in the local community, and further price controls were added to the zones around the park in March 2021 by then Mayor Bottoms and the Atlanta City Council with the interest of insuring: “that surrounding neighborhoods have quality, affordable housing,” said Mayor Bottoms. “Our Westside communities and legacy residents are the bedrock of our city, and our Administration will take the necessary actions to ensure development is carried out in a thoughtful, inclusive manner.”

The Park’s includes several lawns, lots of trails, as well as a playground and a pavilion for events, weddings, and festivals. The Grand Overlook provides a breathtaking view of the reservoir and the Atlanta skyline. In addition to two covered pavilions and public restrooms, the park has bike racks and a playground where kids age 3 to 12 can slide and explore towers and other features. 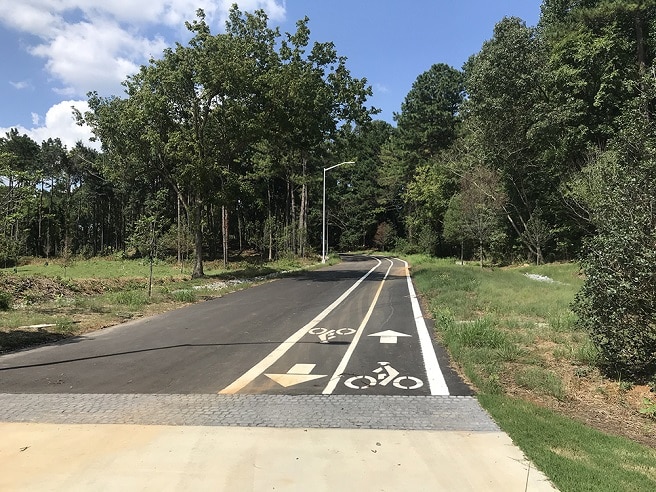 Explore the park’s dense woodlands, grassy meadows, and centerpiece reservoir via five miles of paved trails that are perfect for walking and running. Multiple paved pathways of various lengths are located throughout the park and most are ADA accessible. Maps of pathways are located around the park.

The Red Trail connects to Grove Park — this is a pedestrian only entrance on the south end of the park. This .66-mile trail has designated bike lanes and connects to both parking lots and bisects the Proctor Creek Greenway before emptying onto Grove Park.

The Blue Loop is a half-mile loop that meanders along a path that is adjacent to the reservoir.

The Yellow Loop is a one-third mile loop with the most spectacular views including the quarry and the Atlanta skyline.

The Purple Loop is a 1.35 mile trail winding around the perimeter of the Park and affording additional reservoir views. 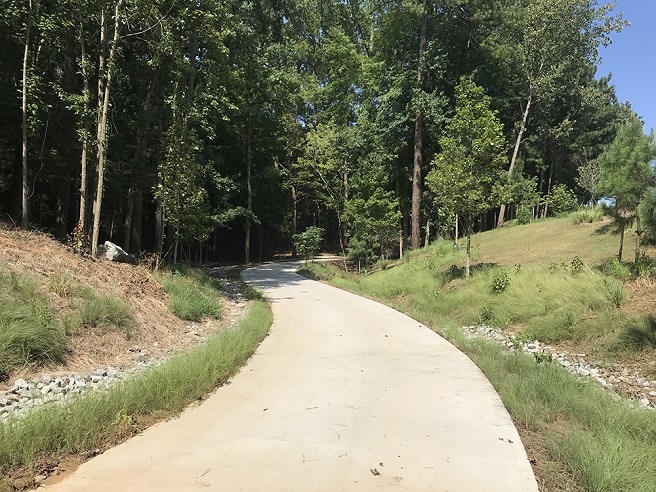 Parking
Paved parking is available at both 1600 and 1660 Johnson Road NW.  Pedestrians and cyclists can access the park via both Johnson parking lots as well as via the Proctor Creek Greenway and the Grove Park neighborhood on the park’s southern edge.

Restrooms
Restrooms are located near both parking lots.

Accessibility
Most trails are paved and ADA compliant; however, the grand overlook has lots of steps, and from the 1660 Johnson Road NW parking lot to the park is quite steep.

For the Dogs
Dogs are welcome and dog water fountains are available. There is NOT a fenced dog park.