Despite ‘curveballs,’ The Battery Atlanta called a success 5 years after concept’s unveiling 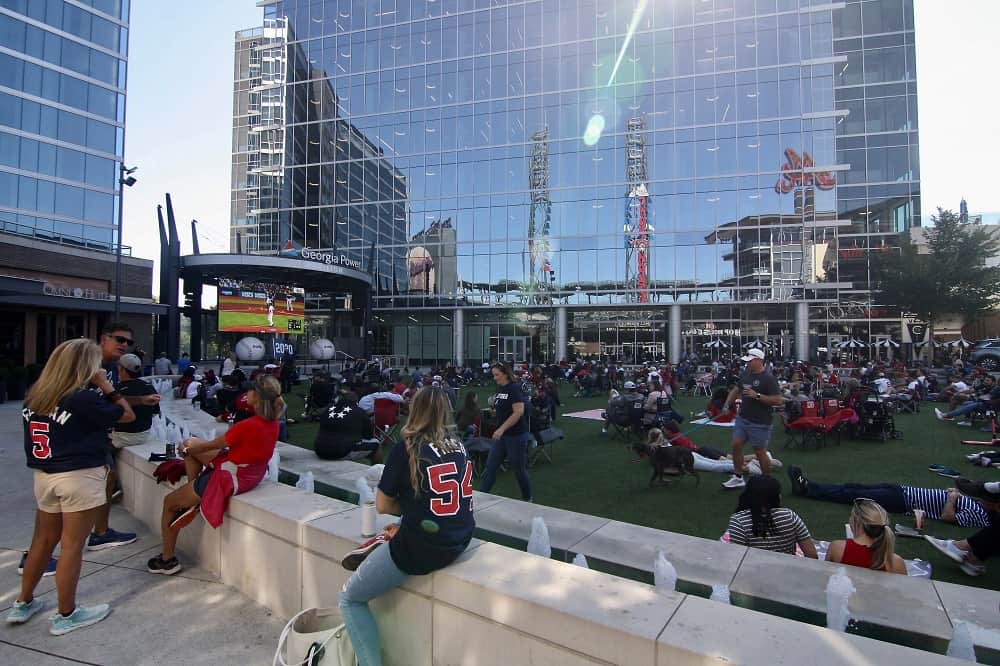 More than a half-dozen times per year, traveling nurse Jacob Tompkins makes the four-hour drive up from Moultrie in South Georgia to The Battery Atlanta. As Tompkins cheers on the Braves, his squad since boyhood, his wife typically goes shopping. That wasn’t an option at Turner Field, where Tompkins says he practically grew up.

“I enjoyed the little T-shirt stands that used to be outside Turner Field all the time,” said Tompkins, donning sunglasses and watching the big screen at The Battery’s Plaza Green. “But there’s a lot more to do here.”

Under bluebird October skies, Tompkins and his two Golden Retrievers—one named Chipper Bones—had joined a couple hundred fans cheering a Braves comeback victory last week against the Marlins in the National League Division Series. A limited number of “watch party” tickets are being offered for fans to view games on Truist Park’s massive scoreboard, but plenty of others seemed content to kick back (and spread out) outside the stadium with cold beers on a Tuesday afternoon, forgetting the world’s woes for a while. 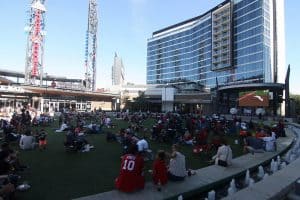 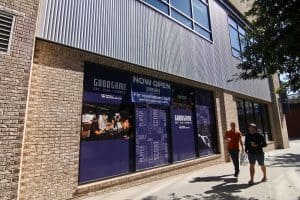 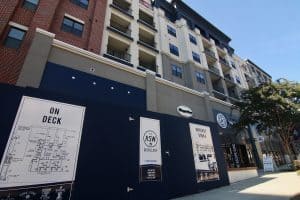 Indeed, five years after The Battery’s name, initial restaurant roster, and overall ambitions were unveiled—one Braves official predicted it would be “the preeminent sports, lifestyle and entertainment destination in America”—a walk around the mixed-use hub shows few obvious signs of pandemic malaise, aside from protective masks. Despite lingering coronavirus setbacks and a wobbly economy, leadership with the Braves and their development arm insists the near and long-term future is bright for the 2-million-square-foot Battery, like the surging baseball team that’s the complex’s marquee tenant.

“The building blocks we put into place on day one [are] paving the road for continued success as brands look for engaging, outdoor locations that can still attract customers in the current COVID-19 climate,” Mike Plant, Braves Development Company president and CEO, wrote in a prepared statement. “Despite the curveballs our industry has faced, we’re confident that our vibrant and dynamic mix of experiences is even more important during these times.”

The Battery’s fall lineup is dotted with planned business openings and a colorful array of communal events, including the return of an autumn cornhole league, free yoga in the plaza, and a “tailgating experience” at various bars and restaurants for baseball and pigskin adherents. During the recent weekday afternoon visit, the property was teeming with construction workers in fluorescent vests. The patios of Wahlburgers and Ph’East restaurants were sparsely peopled but alive with chatter and Bravos-related whoops. A banner reading, “Welcome Back, Our Dining Room is Open” flapped outside Yard House sports bar. According to The Battery’s leadership, 96 percent of retailers and restaurants have reopened after COVID-19 closures. The complex overall has set records for gross sales, traffic and total events every year since it opened in time for Opening Day in 2017, and “the momentum continues to thrive in 2020 despite challenges,” according to a statement provided to Atlanta Real Estate Forum.

But not all the news is rosy. 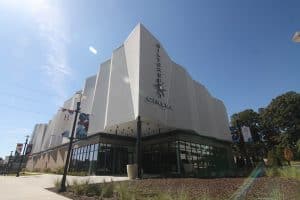 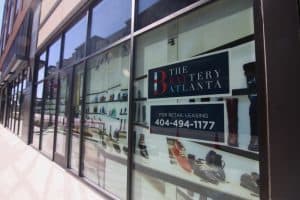 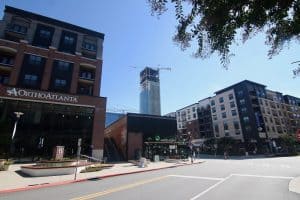 The vibrancy around Truist Park was a stark contrast to The Battery’s opposite end, where the new dine-in Silverspot Cinema building’s fresh landscaping and swanky lobby belied the fact there wasn’t a soul inside. (The cinema “is prepared to open their doors as soon as possible,” officials said.) Across the street, the 142-room Aloft Atlanta at The Battery boutique hotel, another modernistic building, officially opened last month but with black-painted, temporary walls near the entrance and retail vacancies at its base, a rarity for The Battery. Also last month, the Braves laid off dozens of full-time employees from business and baseball operations, all casualties of pandemic-era economic realities, as the AJC reported.

In August, Bisnow relayed that Braves’ second-quarter revenues had plummeted 95 percent without baseball, including a 40-percent dip in development revenue. Nonetheless, as Plant stressed at the time, selling off any pieces of The Battery to remedy losses is not in play.

Instead, the Braves this week pointed to forthcoming additions to The Battery’s retail attractions and status as a jobs hub. (On the residential side, the Braves sold The Battery’s 531 apartments to Atlanta real estate firm Cortland in 2018 for a reported $156 million.)

The Battery “continues to deliver first-to-market and unrivaled experiential offerings,” said Strife, in a statement. “We’ve made strong, long-term relationships and continue to support those businesses as they adapt amid the pandemic.”

The Braves declined to comment on expansion plans beyond 2021, but the Atlanta Business Chronicle recently reported the organization is planning to redevelop the adjacent Circle 75 Office Park, a huge undertaking in conjunction with other development companies. The refreshed mix of 500 apartments, up to 400,000 square feet of offices, and 500 hotel rooms could reportedly finish in 2026.

Back on the Plaza Green, as the Braves began their three-game sweep of the Marlins, Tompkins said he gets the sense The Battery Atlanta is growing each time he visits. That’s helped to change his initial impressions of this mini-city affixed to a big-league ballpark—or vice versa.

“At first, I was kind of unimpressed, because I was so used to Turner Field and loved it,” Tompkins said. “I think as they’ve gotten more stuff, and keep adding stuff, it’s gotten bigger and better.”