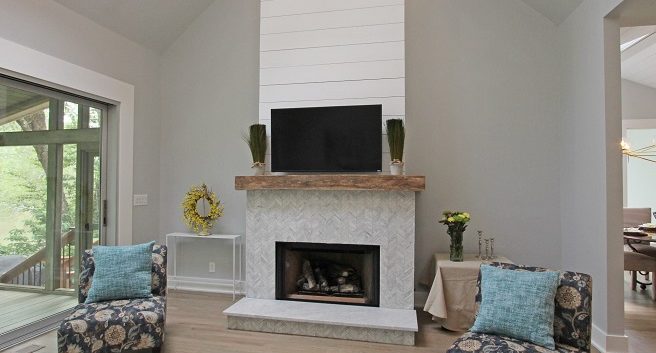 Atlanta Real Estate Forum congratulates Red Door Contracting, LLC for winning a Gold OBIE in the Whole-House Renovation under $250,000 category. Presented by the Atlanta Sales and Marketing Council, the OBIE Awards are the premier awards given in the Atlanta new home construction industry.

This project encompassed a number of aspects, the most significant being the removal of two load bearing walls that opened the kitchen to the family room and eliminated the hallway. The existing breakfast area was increased in size by six feet, to which Red Door Contracting added two casement windows optimizing the lake view. Three sets of French doors in the family room were replaced by three panels of sliding glass doors, 18 feet in length by eight feet tall, optimizing the lake view and having the ability to open the doors to extend the living area to the screened-in porch.

The sunken family room floor was framed to the kitchen floor level and hardwoods were repaired. In addition, new ones were added throughout the main level including both sets of stairs and upper hallway and all were finished with a custom stain color. Cased openings to the dining room and study were opened to the current ceiling height creating a very open foyer. Existing handrails and newel posts were replaced. The ceiling height in certain areas of the basement was increased from seven feet to eight feet and an unfinished area was turned into a basement kitchen and laundry room which was relocated from upstairs where the current butler’s pantry is located.

This entry is deserving of an OBIE because of the dramatic transformation of a once dated and less functional closed off space to a modern, airy, open concept area that encompasses outdoor living. The floor plan is very functional for today’s modern family. The mixture of modern tile and light fixtures blend well with the touches of shiplap and antique oak.

The Greater Atlanta Home Builders Association’s OBIE Awards celebrates its 37th anniversary in 2017. The awards began in 1980 and have grown throughout the years to include more than 100 building, remodeling, marketing and personal achievement categories. The OBIE Awards are named after the obelisk shape of the actual award given. To see all of this year’s OBIE award winners, visit www.AtlantaRealEstateForum.com/Category/OBIEs. Make sure to like, share and comment on this story.