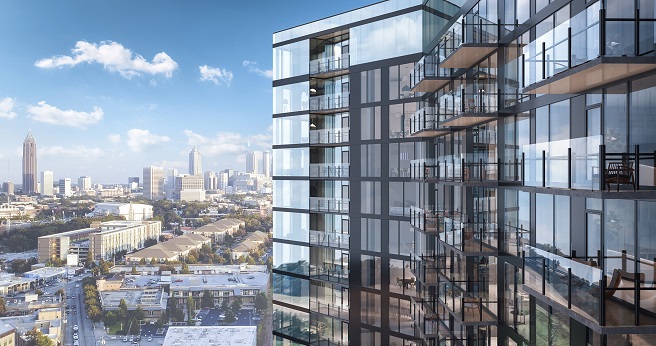 As construction on Seven88 West Midtown moves past the halfway mark on its journey toward topping out, the sales team is hard at work ensuring that the sales paces matches that of the construction. Industry veteran Brandon Powers, Seven88’s Sales Manager and one of the Listing Agents, brings a wealth of experience to the team, while Listing Agent Taylor Adkins’ experience as a high-rise resident allows her to connect with clients in a unique way.

Brandon Powers has garnered quite a few accolades during his 15 years in the real estate industry while working on a wide variety of projects and communities throughout intown Atlanta. Powers was a previous recipient of the Sales Team of the Year Award, which sold at the Community of the Year, the highest honor a community can receive from the Greater Atlanta Home Builders Associations’ OBIE Awards. He has also been named a Top Rung recipient numerous times by the Atlanta Sales and Marketing Council, which recognizes the top salespeople in Atlanta’s new home sales.

As a veteran of the U.S. Air Force, it’s no surprise Powers excels at problem solving. He specializes in converting stagnant communities with little to no sales to successful, top-selling communities. The aspect of the job that Powers enjoys the most is identifying the challenges that come with each and every community, then striving to find out-of-the-box solutions to help homeowners meet their needs.

A native Atlantan with extensive experience, Powers has watched the city grow and evolve into its current form, and his work has allowed him to be part of that growth.

Powers’ sales partner, Taylor Adkins, says that being part of that growth is one of the highlights of her job. “I’m motivated by being a part of the growth and development of Atlanta, as well as how the growth connects the different areas and neighborhoods of this city, allowing for more walkability for residents.”

After starting her real estate career four years ago, Adkins joined Ansley Developer Services in 2018. On a day-to-day basis,  Adkins connects with buyers by listening to what their dream condo consists of. Having lived in a luxury high rise for a number of years, Adkins is able to speak with experience on the future lifestyle homeowners will enjoy, which she says is one of the best lifestyles you can have.

With both sales team members being intimately familiar with Seven88 West Midtown, they are able to speak to the building’s unique advantages.

“Seven88 West Midtown differentiates itself from other Atlanta high rises because there’s never been a floor-to-ceiling glass high rise built on the westside, and this aspect is very exciting to me,” said Powers. “It’s very luxurious and offers pristine views, in addition to offering all the amenities you could want, at a very affordable price. The walkability to all of the fine dining – truly some of the best in all of Atlanta – and the boutiques and other establishments is also very attractive.”

“The fact that this building is truly a full-service, luxury high rise also really stands out to me,” continues Adkins. “The individual condo layouts and unique architectural style are timeless, and the booming West Midtown area  will continue to add appreciation to our purchasers’ investment for years to come.”

Helping purchasers realize what an exciting opportunity this is in one of the fastest-growing areas of intown Atlanta is one of the most rewarding parts of the job for Powers.

A 22-story glass and concrete high-rise, Seven88 West Midtown is under construction at 788 West Marietta Street in Atlanta. Featuring 279 residences and penthouses priced from the mid-$300,000s to $1 million+, each home will offer impressive floor-to-ceiling skyline views, as well as luxurious designer-selected finishes. Residents will have access to an impressive number of resort-style amenities, including an immense entertainment deck and saltwater swimming pool, as well as concierge services and ground-level shopping, dining and entertainment options.