Atlanta builder Jim Chapman Communities has been named the Builder of the Year at the National Association of Home Builders’ (NAHB) 2018 Best of 55+ Housing Awards. The awards program was held during the International Builders’ Show in Orlando and showcased builders who practiced excellence and innovation in the design, development, lifestyle and marketing of 55+ housing in 2017.

“Jim Chapman Communities has led the industry in innovative design and achieving excellence,” said Steve Moore, chair of the Best of 55+ Housing Awards. “They have not only succeeded in achieving the company’s goals and moving forward during tough economic times, but they have contributed to the greater community.”

At the 2017 NAHB International Builders’ Show, Jim Chapman Communities exhibited a 55+ Show Home with three bedrooms, two baths, wide hallways, energy-efficient features, shower stalls, an open-concept floor plan and low-maintenance exteriors. After the show, the company donated the home to HomeAid Atlanta and Family Promise of Hall County at half the cost of construction. The organizations who received the home were delighted with Jim Chapman’s contribution to fighting homelessness in Atlanta. Read more about the donation on Jim Chapman’s blog.

In addition to receiving the Builder of the Year award, Jim Chapman Communities also took home the Best 55+ For-Sale Community – Up to 200 Homes award for Sweet Briar Farms in Woodstock. View the community, floor plans and more at www.JimChapmanCommunities.com.

Congratulations to Jim Chapman Communities! For more news on builder awards, new communities and more, check back with us daily at www.AtlantaRealEstateForum.com. 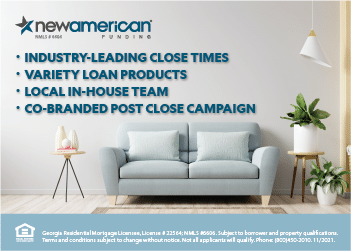