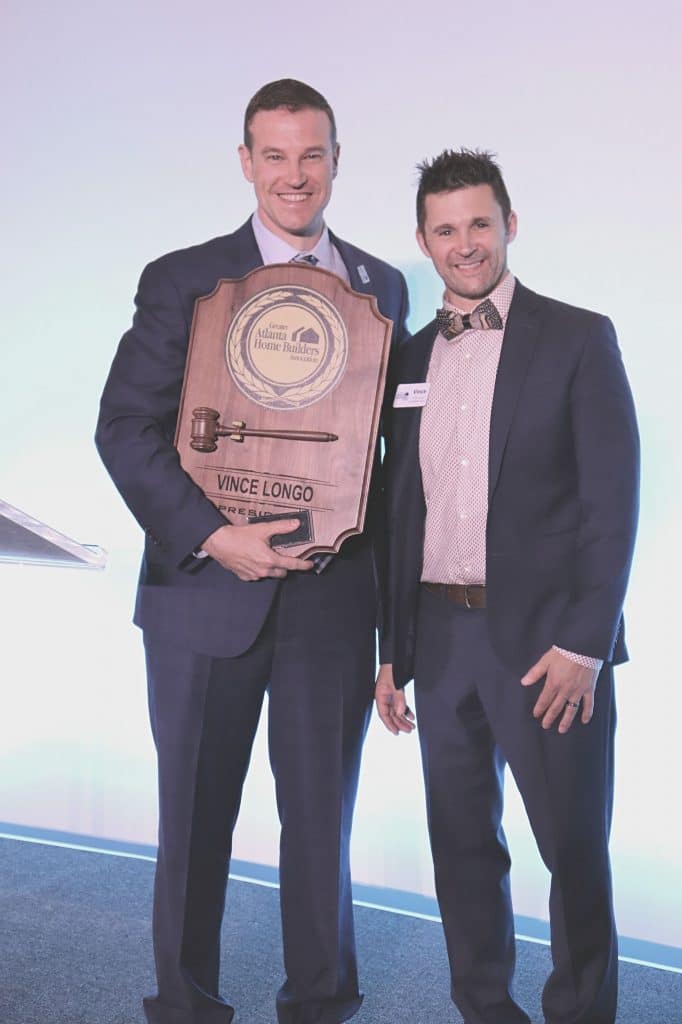 A BIG congratulations! Gabe Chatham named president of The Greater Atlanta Home Builders Association (GAHBA) as it kicked off its 75th anniversary on Wednesday, January 15, 2020, at the Omni Hotel at the Battery. During the celebration GAHBA installed its newly elected officers and board members during its annual Installation & Awards Ceremony. Pictured left: Gabe Chatham and Vince Longo as Longo passes the gavel. Longo served as the association’s 2019 President.

During the ceremony, Gabe Chatham, Vice President of Chathambilt Homes, was installed as the 2020 GAHBA President, and was sworn in by his father, David Chatham, who served as President of the association in 1985 and is a past recipient of the GAHBA’s prestigious Lewis Cenker Award for lifetime achievement in the industry.

The Chatham family has deep roots in the local home building industry. Gabe Chatham’s grandfather, Howard Chatham, began building homes in 1948 in Buckhead. Since then, the company has built thousands of homes and developed hundreds of neighborhoods in the Atlanta area. Chathambilt Homes is now one of north Atlanta’s most awarded real estate developers and builders. Chatham has dedicated time to the association in many capacities, most recently serving as the Membership Committee Chairman and North Fulton Chapter President.

In his speech on Wednesday night, Chatham outlined his three main initiatives for 2020: raising the profile of the association, developing the next generation of trades and expanding the reach of the GAHBA education programs.

“As an association, we are a family. We are better together,” said Chatham. “We need each other to succeed and be at our best. We encourage each other, we challenge each other and when we work together we win together.”

For over 65 years, the Chatham name has been synonymous with quality and value. Howard Chatham grew up as the son of a sharecropper and, after returning from service in WWII, he built the first home for himself and his new bride. Before they had the opportunity to move in, a young executive from Atlanta inquired about the house for his own family. Chatham added up the cost, decided to sell the house, and immediately started another home for his family. After this series of events repeated itself several times, Howard Chatham decided to quit his job as a surveyor for Fulton County and began building houses for others with the same attention to detail and care as though he were building them for his own family.

To date, the Chatham family has built more than 5,500 custom homes and developed over 150 neighborhoods throughout metro Atlanta. Howard Chatham’s passion for quality and value has been passed down to his children and grandchildren. Now in their third generation in the real estate business, the Chathams have been awarded for their excellence in the industry as evidenced by numerous accolades including the Lewis B. Cenker Lifetime Achievement Award won by both Howard and his oldest son, David. The Chatham family’s unwavering commitment to providing quality environments for living is still prominent in each Chatham neighborhood and Chathambilt home. For more information on Chatham named president, the Chatham family and their legacy, visit Chatham Legacy.