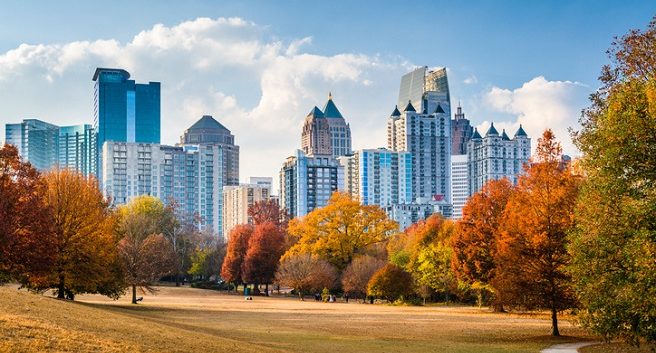 The undisputed business capital of the Southeast, Atlanta houses the headquarters of some of the largest and best-known companies in the United States. The City of Atlanta and the State of Georgia have both been recognized for their efforts to attract and retain big business. Along with the 17 Fortune 500 companies headquartered in Atlanta, there are more than 450 Fortune 500 companies with locations in the city, and all are a testament to our thriving business climate.

The city and state’s success has been well documented as Georgia was named the No. 1 State for Business Climate four years in a row and the No. 1 State for Business five years in a row by Site Selection. What makes metro Atlanta the place to do business? A diverse and highly-talented workforce made of more than 5.8 million people, many of whom have attended one of the state’s top educational institutions, is just one of the many factors to the city’s success. Another leading factor is that metro Atlanta has the lowest relative cost of doing business among the nation’s 10 largest metro areas (KPMG, Competitive Alternatives: Guide to International Business Location Costs, 2016). In addition, the state offers easy access to global markets thanks to Hartsfield-Jackson Atlanta International Airport, the world’s busiest airport, as well as the Port of Savannah, the fourth-largest and fastest-growing container seaport in North America, and our rail and highway networks.

In addition to the rise in employment, new companies are moving to Atlanta, creating even more new jobs. Currently, Indeed.com has nearly 60,000 jobs listed in the metro Atlanta region with nearly two-thirds of them full-time positions and just over half considered entry level. Available jobs include positions with top companies such as SunTrust, Marriott International, Emory University and The Home Depot. There are also several staffing agencies located in our city specializing in everything from IT to construction to healthcare.

The workforce in Atlanta is as varied as the different staffing agencies, but specific sectors are seeing exceptional growth or a shortage of workers. The construction supersector saw the largest year-over-year growth from June 2017 to June 2018, with a growth rate of 6.9 percent, or 8,400 jobs. Another major industry in Georgia, the hospitality and leisure sector grew by four percent, or 11,900 jobs. Areas still struggling due to a shortage of workers, where employer demand is outpacing the number of workers available with the necessary skills, include everything from web development and data science to public policy and people management, according to LinkedIn’s August 2018 Workforce Report for Atlanta.

For those looking to advance their career, or for those searching for a position that will allow them to relocate to Atlanta, KNOWAtlanta offers up-to-date news on metro Atlanta’s business growth and job market.