In 1838, Henry Irby purchased 202 ½ acres surrounding the present intersection of Peachtree, Roswell and West Paces Ferry Roads for $650. There he established a small settlement complete with a tavern and general store, which came to be known as Irbyville. A story repudiates that the name “Buckhead” comes from Irby taking the head of a large buck deer and placing it on a stick across from his grandfather’s house, which is now the location of the St. Regis Hotel. By the late 1800s, Buckhead had become a recreational spot for wealthy Atlantans, who came here for rural vacationing and time outside of the increasingly urban city center. During this time, the area was known as “Atlanta Heights” but by the 1920s was again referred to as Buckhead. By the 1920s, wealthy Atlantans were building mansions in and around Buckhead. Construction of these homes continued into the 1930s despite the great depression, with one of the largest on Peachtree road being constructed in 1930 by Henry Aaron Alexander.

Several black southern communities used to be present in and around Buckhead. These communities were torn up by white southerners in the wake of urban expansion and development in the area. Where the present Lenox Square MARTA Station is located once was the heart of Johnsontown. Between Lenox Road and the intersection of I-75 and Ga. 400 was Piney Grove, and right in the middle of the Buckhead area was Macedonia Park, the present day Frankie Allen Park. One developer went as far as to request permission to dig up a small cemetery in Macedonia Park, Mt. Olive Cemetery was left in place however after that proposal was denied by the city.

Buckhead was annexed into the city limits of Atlanta after two attempts by city authorities; one in 1946 and the successful merger in 1952 Buckhead continued to increase in population and to attract new businesses, this mid-century growth culminated in the opening of Lenox Square mall in 1959. Lenox Square at that time was one of the first malls in the United States, and remains one of the largest malls in the Southeast.

86,184 people call Buckhead home, and it is considered the “uptown district” of Atlanta. The neighborhood is filled with elegant hotels, condominiums, high rises and suburban neighborhoods. With a 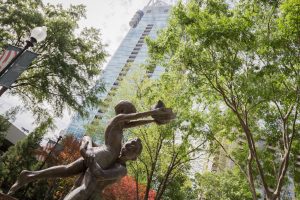 wealth of local attractions, Buckhead offers residents seeking an upscale lifestyle the opportunity to explore trendy restaurants, shop ’til they drop at boutiques and malls and lots of independent art galleries that will speak to an artist’s soul.

According to Livable Buckhead, the population is expected to swell to 114,000 residents by 2040. The residential growth is predicted to occur primarily in the rise of multifamily development. A future for growing families, the neighborhood offers promising trends regarding housing, education and employment.

Currently, the median Buckhead resident is 36 years old, but the fastest growing segment of the population is the 20 to 30 age bracket. This means that there is a great future in store for younger generations wishing to relocate. There is a huge population of young residents with similar interests, excited to create a community.

The daytime population almost doubles due to the influx of workers and visitors traveling into the city, including day-time workers, shoppers, tourists and more. Most of the population works in the industry sector with an average income of less than $50,000. Additionally, around 44% of jobs within the city cater to incoming tourists, so there is a large retail and hospitality presence.

The median home price is $483,500, according to RedFin. The neighborhood’s real estate is booming, especially for prospective homebuyers with a large budget. Many of these homes feature spacious backyards, updated amenities, pools, attached garages and charming exteriors. Zillow shows there are many homes, apartments, condos and townhomes ready to rent ranging from $1,000 to $4,000 per month.

Fitlife Foods, a lifestyle and wellness brand known for its fresh, flavorful, well-balanced prepared meals, announced its newest brick and mortar location is coming to the Buckhead neighborhood of Atlanta, Georgia off Roswell Road in the Tuxedo Festival plaza. The grand opening is currently scheduled for Wednesday, September 22, 2021, so mark your calendar! Founded 10 years ago in Tampa, Fla., this is the first brick and mortar location outside of Florida, although the company has been delivering to Atlanta since 2018. The flagship location features seating, flavor boxes (microwaves) for easy heating and complimentary electrolyte-infused water via the Flowater system.

Lenox Square Mall, known for its variety of stores, is one of the most popular places in Atlanta. The mall is the perfect place to complete a shopping spree or fulfill last-minute holiday shopping wishes. Stores include Bloomingdales, Macy’s, Urban Outfitters, J. Crew, Kate Spade, Burberry, Prada and Zara. After shopping, grab a bite to eat at California Pizza Kitchen, Cheesecake Factory, Cousins Maine Lobster or True Food Kitchen.

Cafe Sunflower Buckhead caters to vegans, vegetarians and anyone looking to explore the lighter side of dinner. The cafe provides more than just salads and sides for people with food restrictions, so visit here if looking for a delicious and healthy alternative to other restaurants. Menu items include spring rolls, nachos, artichoke and spinach dip, fried avocado tacos, dumplings, eggplant lasagna, pesto pasta and vegan hamburgers.

The Buckhead Theatre reopened in 2010 as a performance venue for almost every musical genre, including country, rock, hip hop alternative and more. The theatre originally opened in 1931 as a movie house. After two years of intensive renovations, the location now showcases lectures, comedy shows, Broadway plays and private and public events.

Visit the LEGOLand Discovery Center with interactive hands-on attractions and classes with a LEGO Master Model Builder. Kids ages 3 to 12 will love this fun destination where millions of LEGO Bricks surround participants along with cool games like Merlin’s Apprentice and Kingdom Quest.

On a day off, visit Chastain Park and the Chastain Park Amphitheatre. The park includes paved jogging tracks, tennis courts, an arts center, a golf course, playgrounds, a horse park and gymnasium. This park has it all, and the amphitheatre host many artists from the Atlanta Symphony to John Legend.

The Blue Heron Nature Preserve features 30 acres of parklands, wetlands and trails that border the Nancy Creek. The preserve is free and open to the public where, if lucky, you can spot a heron perched in a tree or pecking in the marshes. Learn more about by visiting the website or listen to the preserve’s feature on the Atlanta Real Estate Forum Radio podcast.

The Atlanta History Center is home to the Swan House, built in 1928 and designed by architect Philip Trammel Shutze, along with other facilities like the Smith Farm, Rhododendron Garden, Victorian Playhouse, Kenan Research Center, a gift shop and acres of historic gardens and trails. After working up a sweat, eat at the Souper Jenny Café also located on the grounds. Learn more about the history center by listening to the center’s Around Atlanta segment of Atlanta Real Estate Forum Radio, just click here.

Alonzo Franklin Herndon was born into slavery but then went on to become Atlanta’s first Black millionaire and founder of the Atlanta Life Insurance Company. His house, named Herndon Home, is one of Atlanta’s most significant architectural successes. The home was completed in 1910 and is a two-story, 15 room Beaux Arts mansion built by local black craftsmen. Guided tours are conducted from 10 a.m. to 4 p.m. on Tuesdays and Thursdays and by appointment on Saturdays.

The National Center for Civil and Human Rights connects the U.S. Civil Rights Movement to current human rights challenges. There are many virtual and in-person programs for visitors interested in educating oneself about right-wing extremism, LGBT+ campaigns, African American freedoms and Juneteenth.

Visit Buckhead and experience all the neighborhood has to offer.