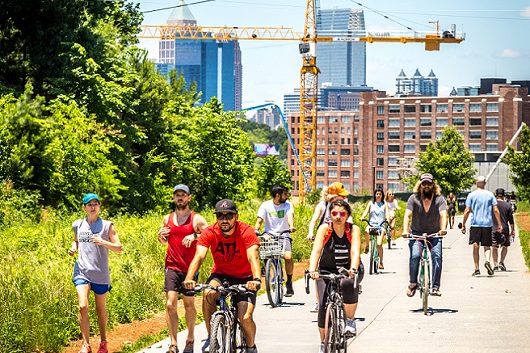 Metro Atlanta has some of the most beautiful trail systems – just search “trails” on this website, and you’ll see the many trails we’ve written about over the years. One of the largest, the Atlanta BeltLine, is constantly growing! In fact, Atlanta BeltLine, Inc. is excited to announce that funding has been identified that will allow for the construction of an additional 0.75 mile segment of the paved Southside Trail!

“We are thrilled at this opportunity to invest in communities in south and southwest Atlanta and to spur economic investment between key developing job centers,” said Clyde Higgs, President and CEO of Atlanta BeltLine, Inc. “We look forward to building on this initial segment to connect the Atlanta BeltLine to all neighborhoods and businesses in the southern crescent.”

This upcoming paved trail, currently known as Southside Trail – West, will include a 14-foot-wide concrete trail, ADA-accessible access points, environmental remediation, lights, security cameras, retention walls, full landscaping and more. Pre-construction design and real estate acquisitions are expected to be complete over the next several months, and once the general contractor is hired and secured, the construction schedule will be announced, and community meetings will continue to be hosted throughout the construction.

The remainder of the Southside Trail will open as an unpaved interim trail in August 2019. This trail will include access to 11 public streets, environmental remediation, bridge handrails, crosswalks, lighting in tunnels and many more. The interim trail is funded through contributions to the Atlanta BeltLine Partnership’s Opening the Corridor capital campaign, including a lead gift from The Coca-Cola Foundation.

When complete, the Southside Trail will consist of 4.5 miles of paved path and will be the perfect trail to take a scenic walk or get from destination to destination without the hassle of the busy streets!

Jonathan White with Meritage Homes joins the studio to talk about reasons to buy new construction now, can’t-miss incentives as well as current and upcoming communities.

Atlanta Communities with Amenities for Dogs