Atlanta BeltLine Seeks Funding to Complete All Trails Before 2030

The completion of all Atlanta BeltLine trails may be providing enhanced walkability, as well as new affordable housing and job opportunities well before 2030. On Tuesday, January 19, new legislation to create a Special Service District (SSD) within the Atlanta BeltLine Planning Area was introduced at the Atlanta City Council meeting. This new revenue source would ensure the completion of the 22-mile loop of mainline, multi-use trails and stimulate jobs and economic recovery in the Atlanta area. 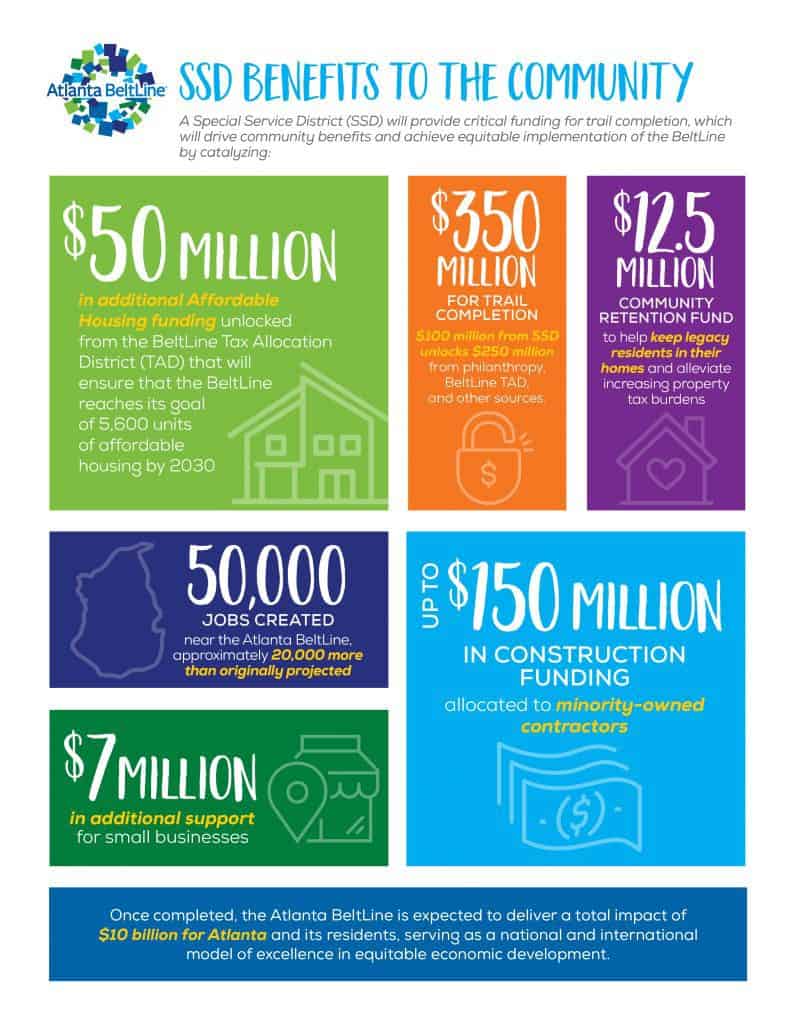 Without the additional funding from the SDD, the Atlanta BeltLine would not be completed before the Tax Allocation District (TAD) expires in 2030. Legal disputes following the recession have already resulted in TAD generating $1 billion less than originally projected for the project. While the costs to design and construct the remaining trail corridor is estimated at $350 million, the completed project would yield a $10 billion economic impact and 50,000 new permanent jobs for the City of Atlanta. According to Mayor Bottoms, these additional funds will help the organization move another step closer to the city’s vision of One Atlanta where affordable housing and jobs are in abundance.

An SSD is defined as a geographical district created through legislation that levies additional property taxes to provide local government services. In this scenario, both commercial and multi-family property owners within the Atlanta BeltLine Planning Area (which includes the half-mile on either side of the corridor) would see an estimated 2-mill increase or two-tenths of a penny per dollar in assessed value of each property. These funds would be used towards trail acquisition, design and construction. According to Clyde Higgs, CEO of Atlanta BeltLine, Inc. (ABI), the proposed district will bring added value to communities along the trail. Additionally, the organization’s focus on job creation, housing affordability and equitable economic access fully support Mayor Bottoms’ One Atlanta Plan.

It should be noted that residents living in single-family homes would not be subjected to the tax increase. In fact, nearly half of the commercial and multi-family properties contained within the proposed SSD would pay less than an additional $250 annually, or about $20 a month. As an added community bonus, the new funding for trail completion through the SSD, along with the philanthropic support and the growth in TAD revenue, would generate an additional $50 million in funding to create deeper and longer-term housing affordability solutions around the BeltLine and $7 million in small business support.

The Atlanta BeltLine organizations place affordable housing as a top priority. Not only is ABI committed to meeting the project’s 5,600-unit goal, but the Atlanta BeltLine Partnership (ABP) also recently launched the Legacy Resident Retention Program. This $12.5 million, philanthropically funded initiative will help to alleviate the heavy burden of increasing property taxes for legacy homeowners while complementing existing Home Empowerment Workshops that connect BeltLine residents with resources to stay in their homes.

Atlanta’s top philanthropic leaders have made the early and ongoing investments to bring the BeltLine Trails to life. However, it is up to the community to help the organization complete the project and see the benefits brought to the communities it connects to. Fundraising success is dependent upon those who benefit most financially from the Atlanta BeltLine’s completion and passing the Special Service District Legislation is the next step to community revitalization.