Renters’ interest in moving picked up in 2020, according to new research done by STORAGECafé that analyzed approx. 1.7 million renter applications. Despite a year marked by health-related worries and employment concerns, 18% more renters relocated in 2020 compared to 2019 at a national level. Atlanta ranked 17th among the country’s major cities in terms of renter interest, attracting mostly newcomer Millennial renters and former suburban residents.

64% of the renters coming to Atlanta were already based in Georgia, but New Yorkers also eye ATL for relocation. 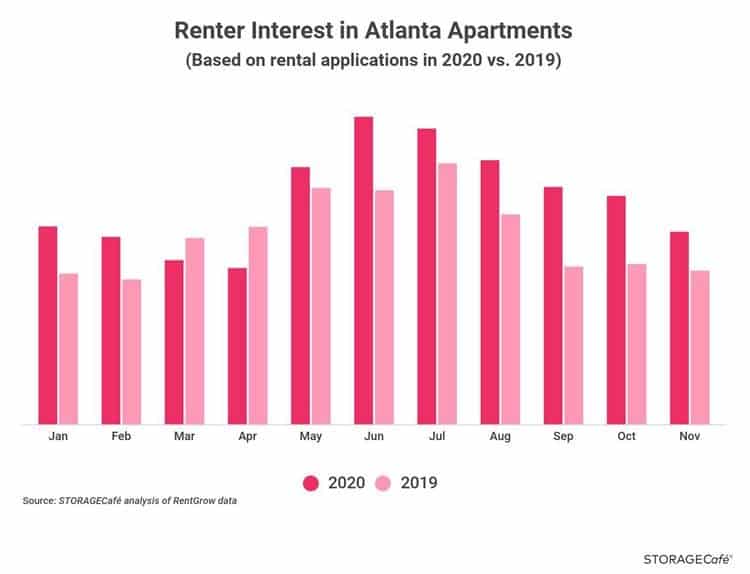 Atlanta stands out as the preferred destination for Georgians living in smaller cities and towns, as about 64% of the renters that relocated to the city last year came from in-state. Most of the newcomers, 57%, came from suburban areas, showing that people’s interest for the urban lifestyle remained strong even during a pandemic.

Relocations to Atlanta were most likely boosted by the city’s hot job market – according to Cyberstates, an annual tech report published by CompTIA, Atlanta is expected to see an almost 9% boost in tech employees by 2026. The average size of apartments in Atlanta, a comfortable 954 square feet, which places it second among the country’s largest 50 cities for this indicator, is another incentive for renters looking to relocate. In fact, compared to the average size of apartments in their cities of origin, about 48% of them applied for larger ones.

Nearby Marietta is the originating city of the largest cohort of inbound renters, followed by Decatur and Smyrna. However, Atlanta is also attractive for people from across the country, and it’s New Yorkers who make up the largest group of out-of-state newcomers. Chicagoans are also interested in Atlanta’s more relaxed urban setting, and the ones who make the move to Atlanta from the Windy City will often find a kinder climate and a lower cost of living.

The neighborhoods which received the most newcomers are Buckhead, Cumberland and West Midtown.

Atlanta is seeing a significant influx of young people, as approx. 77% of the renters who came to the city last year were aged 40 and under. At a stage of life where they are building careers and are willing to relocate for professional opportunities, Millennial renters are finding Atlanta a fertile land for their aspirations.

Another large chunk of the renters migrating to Atlanta, about 20%, are Gen Zers. Almost 16% of inbound renters were Gen Xers, while less than 7% were Baby Boomers.

12% of incoming renters make more than 100K per year

Nationally, there’s more interest in urban rather than suburban areas

When looking at the national picture, we see that the anticipated exodus toward suburbs, fueled by pandemic-related concerns, did not occur in 2020. In fact, about 68% of the renters who relocated throughout 2020 were looking for urban areas, and only 32% were interested in suburbs. This is in line with the previous years’ evolution, as the proportion of relocating renters interested in urban areas increased from 61% in 2016 to 68% currently.

The percentage of renters on the move seeking out the peaceful suburban lifestyle drops even more when looking at those moving from big cities – only 21% of the renters who were living last year in cities with a population of over 1 million decided to relocate to a suburban area. On the other hand, 40% of the renters living in cities with a population of 50K and under chose suburbs for their new home in 2020.

Age and income groups also have an impact on urban/suburban preferences. Millennials and Gen Zers are the most likely to move to a city (66%), compared to only 61% of Baby Boomers. As for income, about 60% of the renters with an income of 30K and under are choosing a city as their new home. At the same time, 75% of those making between 100K and 2M per year prefer cities as opposed to suburbs.

Millennial renters made up the bulk of the renters moving last year at a national level – 48%, followed by Gen Zers, with 23%. Most of the renters on the move, 69%, prefer in-state relocations. The top three cities that attracted the most renters last year were Los Angeles, New York City, and Chicago.