2020 Economic Forecast: Which Way Will the Camel Sit?

Dr. Rajeev Dhawan of the Economic Forecasting Center at Georgia State University’s Robinson College of Business gives his 2020 Economic forecast. He says, “A maturing business cycle, the ongoing global slowdown and the U.S.-China trade spat are fostering a deteriorating business investment climate, and a slowdown in job growth has made consumers wary of spending.” 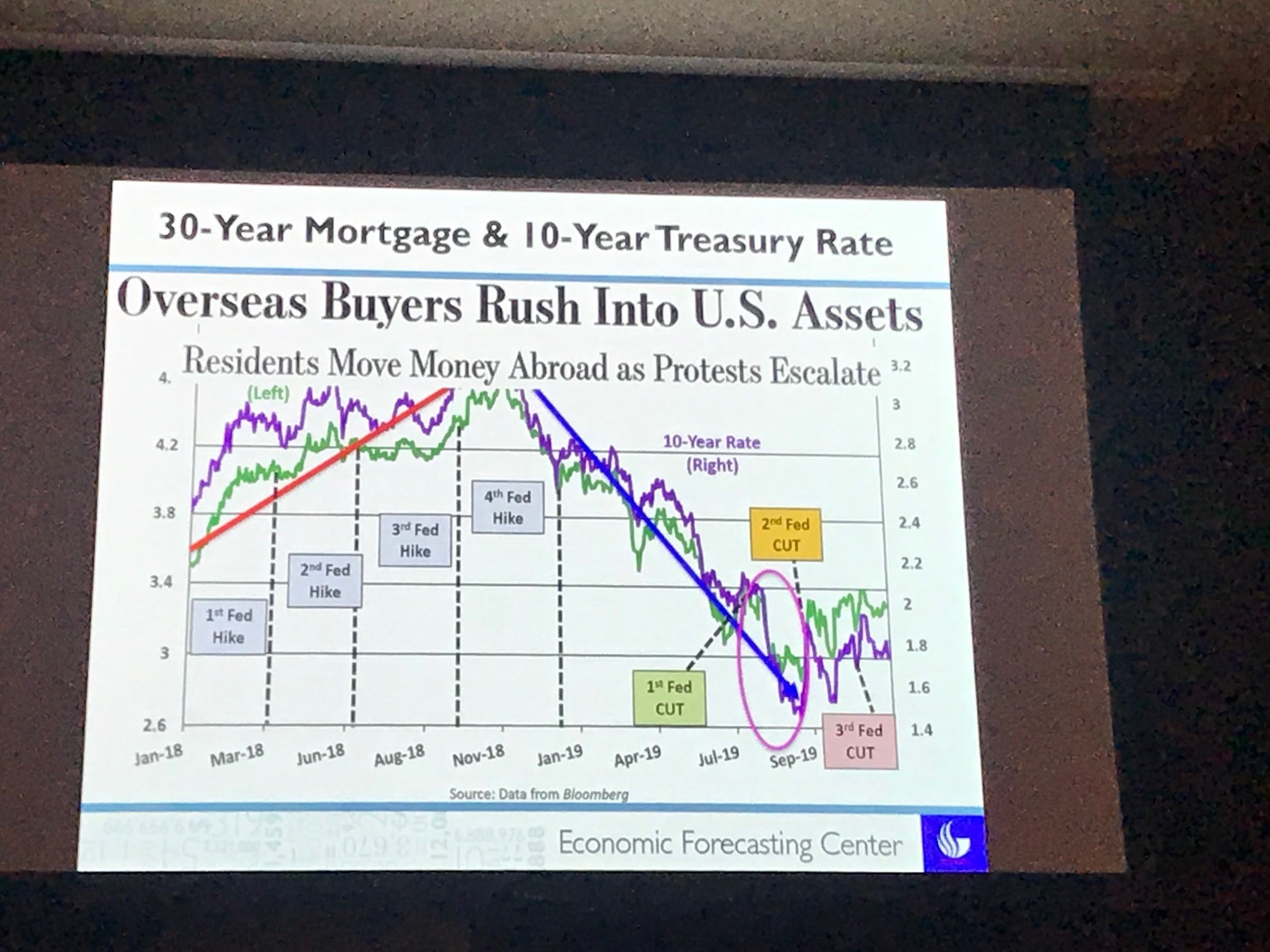 Related to overseas buyers, Dhawan commented at MarketNSight’s MarketWatch on December 5 with his unique humor, “We just have to be the cleanest dirty shirt in the laundry basket.”

“Investments are always a risky bet. And as the amount of uncertainty rises, investment spending is the first to suffer,” Dhawan wrote in his “Forecast of the Nation,” released November 20.

Dhawan added a little humor at MarketWatch by saying, “Consumption moderates because of investment. People are waiting to see which way the camel will sit.

The Global Economic Policy Uncertainty Index, at its highest level since 1997, has been extremely elevated for the past 18 months. Dhawan attributes the uncertainty to the imposition of tariffs by the world’s two largest trading partners, the U.S. and China, on each other’s exports.

“Although there are other trade skirmishes (between Japan and Korea, the ongoing Brexit saga, the Catalonia secession in Spain and even the September missile attack on Saudi oil facilities) the U.S.-China trade spat takes center stage,” he said.

The forecaster posits that as management of U.S.-based global companies consider moving factories out of China and undoing supply chains they spent decades establishing, “their primary focus is on the vexing issue of building new supply chains and not on expanding existing business capacity, i.e. hiring.”

The fallout is apparent in investment growth rates. Business investment declined 3.0 percent in the third quarter of 2019, after dropping 1.0 in the previous quarter, which was a dramatic contrast to the first half of 2018, when investment grew 8.4 percent following the Tax Cuts and Jobs Act of 2017.

Two other factors, or shocks, contributed to weak investment – reduced fracking investment due to falling oil prices and the impact of the March 2019 grounding of the Boeing 737 MAX on technology manufacturing. Looking forward, the Institute for Supply Management Manufacturing Index is below 50, signaling future contraction in the industrial sector.

As for consumer confidence, a 10-point market drop since Aug. 2019 could signal a consumption growth slowdown. The last three Federal Reserve rate cuts should have boosted consumption by lowering interest rates for car loans and new or refinanced mortgages. However, October 2019 vehicle sales of 16.5 million units were much lower than the average 17.0 million units sold the previous three months.

Damage from the last few quarters of deficient investment growth will be evident in subpar GDP growth, less than 1.5 percent on average in the coming quarters. Dhawan characterizes business investment equipment growth as “nonexistent” until Boeing’s woes end in mid-2020.

“As growth drops well below the 1.8 percent growth potential, the Fed will be forced to cut rates several times in early 2020, most likely during the March and June meetings of the Federal Open Market Committee,” Dhawan said.

“The election will be over by 2021, hopefully, and no matter who is in the White House, businesses can plan again with somewhat more certainty than at present,” Dhawan said.

One-off factors, combined with an ongoing global slowdown, the U.S.-Chinese trade spat and a deteriorating domestic investment climate have resulted in unusually large deviations from average monthly job gain expectations in Georgia, according to Rajeev Dhawan of the Economic Forecasting Center at Georgia State University’s Robinson College of Business.

“Monthly job creation numbers always fluctuate, just like monthly rainfall totals, and rarely is there a month that hits the so-called average mark. However, it’s unusual to see three negative growth months out of nine, without a special reason,” Dhawan wrote in his quarterly “Forecast of Georgia and Atlanta,”.

How big were the fluctuations? Georgia gained 23,200 jobs in the first quarter of 2019, followed by only 300 job gains in the second quarter, then roared back with 29,100 jobs in the third quarter of the year.

These service sectors account for 30 percent of the state’s employment base, but they produced 53 percent of job additions during those four months. When the events were over, the three sectors shed 6,200 of the 9,700 jobs lost in March and April, explaining the ups and downs of job growth over the first two quarters.

The forecaster examined premium job creation in the state’s catalyst sectors – corporate, technology and manufacturing. The three sectors account for about one-quarter of Georgia’s employment base, pay well above the median wage, and led to demand for products and services, resulting in jobs in supporting sectors. One support sector, transportation, warehousing and utilities, has added only 700 jobs in the first three quarters of 2019 despite the growth of e-commerce.

“E-commerce is not the entire story,” Dhawan said. “The health of the transportation sector is also tied to activities at the Port of Savannah and its network of warehouses. A slowing growth rate of tonnage generated at the port and a record-high proportion of empty containers on outbound ships means fewer trips from warehouses to the port, less demand for storage and fewer jobs.”

Savannah exports are mostly manufactured products – cars from the Kia plant in LaGrange, paper and pulp products from Albany-area mills, automotive machinery from Athens and Gainesville, and industrial carpeting from Dalton.

“If the global slowdown, coupled with a strong dollar, reduces demand for Georgia exports, we will produce less, which will show up in the performance of the state’s manufacturing sector and employment growth in the Savannah metro area,” Dhawan said. “The global growth climate is so bad that Savannah-based Gulfstream announced it will lay off 362 people at its main facility in the coming weeks. Loss of these high-paying jobs is never good for the metro area where they happen.”

With the current economic expansion in its 10th year, the business cycle is maturing, and job quality is deteriorating, according to Dhawan. For example, when Georgia added 128,100 jobs in 2014, 40 percent were in high-paying catalyst sectors. In 2018, when Georgia added 89,000 jobs, the proportion of catalyst jobs had plunged to 12 percent.

Dhawan said the chance of an upsurge in total job creation is low for the coming six to eight quarters.

“Chalk it up to the ongoing global slowdown in Europe and Latin America, coupled with our trade spat with China and a weakening domestic investment climate,” he said. “Global and domestic headwinds are buffeting Georgia’s catalyst sectors, making for an overall lower future growth path.”

We’d love to know your thoughts on this 2020 Economic Forecast, please share them in the comments.

Tips from Traton Homes for Hosting a Terrific Thanksgiving Dinner